What is "Carpal Tunnel Syndrome?" 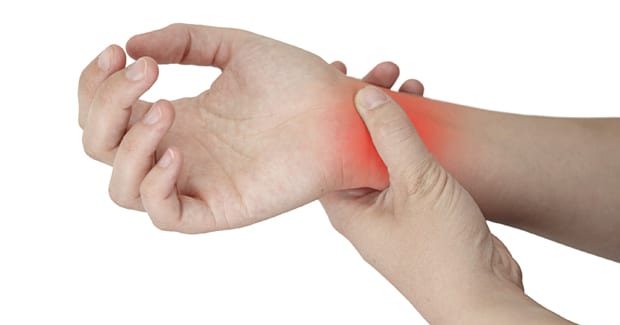 Carpal tunnel syndrome occurs when the nerve (median), which runs from the forearm into the hand, becomes compressed between the displaced bones of the wrist. Nerve signals originate in the brain and follow tracts down the spinal cord through openings between the neck bones (vertebrae). The nerves then travel down the arm and into the hand. At the wrist, a semicircular tunnel allows the nerves to travel through the highly mobile wrist area. The tunnel is a narrow and rigid passageway of ligaments and bones at the wrist and contains the median nerve and tendons. The tunnel deforms when there is sprain or damage to the ligaments allowing the bones to move away from their normal positions.

Sometimes, thickening from irritated tendons or other swelling narrows the tunnel and causes the median nerve to be pinched. This is why anti-inflammatory drugs such as aspirin or ibuprofen will decrease the pain in some patients. But they really are a never-ending kind of treatment that never gets at the cause of why there is inflammation in the first place—not to mention the potential for significant side effects, especially in older patients, that can include stomach or intestinal bleeding (ulcers).

The median nerve controls sensations to the palm side of the thumb and fingers (except the little finger) as well as impulses to some small muscles in the hand that allow the fingers and thumb to move. Pain, tingling, and numbness in the hand can be caused by neck problems such as a herniated disk, sprains, and arthritis.


When carpal tunnel syndrome strikes, the result may be pain, weakness, or numbness in the hand and wrist. Sometimes the pain runs from the wrist and back up the forearm. Many patients will also say that they have other bothersome symptoms such as back and neck pain or stiffness.

Many patients believe that surgery will help their condition or have had it recommended to them. It is important to make sure that a comprehensive diagnosis is obtained prior to contemplating surgery. Surgery is a very drastic and last resort type of option so one should try conservative treatments first. If the problem is an irritated or compressed nerve in the neck, no amount of wrist surgery will help that type of problem.

A comprehensive and thorough examination is needed to determine the cause of your carpal tunnel syndrome symptoms.