Published on 3 May 2018 under Advanced 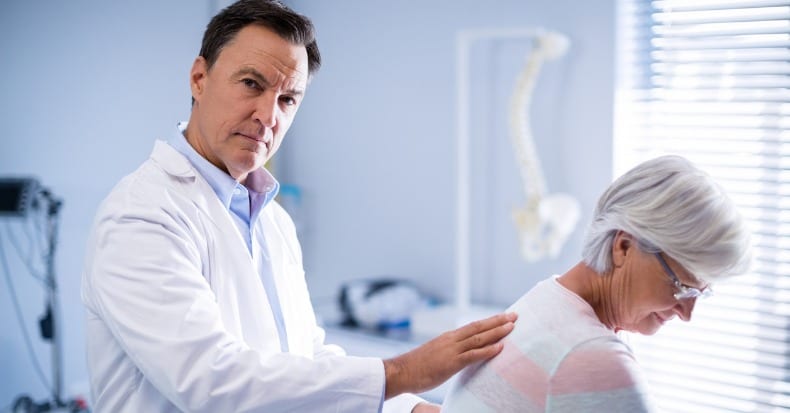 Pain is a huge problem in America, and all Americans know that opiate drugs are not the solution to our pain problem.

In her 2014 book, A Nation in Pain, Judy Foreman claims, “Out of 238 million American adults, 100 million live in chronic pain.” (1) A conservative estimate of the direct costs and lost productivity resulting from this pain is up to $635 billion yearly (2).

Chronic pain affects every region of the body. Quantifying the anatomical regions for American’s chronic pain shows that the most significantly affected region is the lower back followed by (3):

There are many reasons a person might have pain. The leading theory on the perception of pain was proposed more than a half century ago  (1965) by pain researchers Ronald Melzack and Patrick Wall (4). Their theory is known as the Gate Control Theory of Pain. Ronald Melzack, PhD, is a Canadian psychologist. Patrick Wall, MD (d. 2001), was a British neuroscientist and pain expert, as well as the first editor of the journal Pain.

In 2002, the British Journal of Anaesthesia published a study reaffirming the validity of the Gate Theory of Pain in an article titled (5):

Gate Control Theory of Pain Stands the Test of Time

An oversimplified explanation of their Gate Control Theory of Pain is that the pain electrical signal to the cortical brain can be inhibited by non-painful electrical signals arising from other sensory afferents, especially from joint mechanoreceptors (proprioceptors).

“Spinal manipulation is essentially an assisted passive motion applied to the spinal apophyseal and sacroiliac joints.”

Melzack and Wall proposed the Gate Theory of Pain in 1965, and this theory has “withstood rigorous scientific scrutiny.”

The facet capsules are densely populated with mechanoreceptors. “Increased proprioceptive input in the form of spinal mobility tends to decrease the central transmission of pain from adjacent spinal structures by closing the gate. Any therapy which induces motion into articular structures will help inhibit pain transmission by this means.”

Simply put, when spinal joints do not have optimum movement, the pain gate at that level is open. Chiropractic adjusting (specific manipulation) increases the firing of the mechanical nerves (mechanoreceptors/proprioceptors), which in turn creates a neurological sequence of events that closes the pain gate. This often causes an immediate reduction in pain.

The most important modern review of the chiropractic profession was published in the journal Spine in December 2017, and titled (7):

The Prevalence, Patterns, and Predictors
of Chiropractic Use Among US Adults
Results From the 2012 National Health Interview Survey

The aim of this study was to investigate the lifetime and 12-month prevalence, patterns, and predictors of chiropractic utilization in the US general population. The data for this study was from the National Health Interview Survey (NHIS), which is the principle and reliable source of comprehensive health care information in the United States, utilizing a nationally representative sample of the civilian non-institutionalized population of the United States. The NHIS dataset provides a large-scale nationally representative sample regarding chiropractic use.

The authors make the following points pertaining to the chiropractic profession:

“Chiropractic is one of the largest manual therapy professions in the United States and internationally.”

“Chiropractic is one of the commonly used complementary health approaches in the United States and internationally.”

The review of the chiropractic profession revealed these statistics:

The article included these specific comments:

“Back pain (63.0%) and neck pain (30.2%) were the most prevalent health problems for chiropractic consultations and the majority of users reported chiropractic helping a great deal with their health problem and improving overall health or well-being.”

“Back pain or back problems (63.2%) and neck pain or neck problems (30.2%) were by far the top specific health problems for which people consulted a chiropractor in the past 12 months, followed by joint pain/stiffness (13.6%) and other pain conditions. Around two in three users (64.5%) reported that chiropractic had helped a great deal to address these health problems.”

“A substantial proportion of US adults utilized chiropractic services during the past 12 months and reported associated positive outcomes for overall well-being and/or specific health problems for which concurrent conventional care was common.”

“Our analyses show that, among the US adult population, spinal pain and problems - specifically for back pain and neck pain - have positive associations with the use of chiropractic.”

“Chiropractic services are an important component of the healthcare provision for patients affected by musculoskeletal disorders (especially for back pain and neck pain) and/or for maintaining their overall well-being.”

“Our analysis suggests the use of chiropractic practice in the US population has increased from the period 2002 to 2012.”

There is a high level of satisfaction by patients who seek treatment for spinal and other pain syndromes from chiropractors. By a significant margin, the primary reason for adults in the US to seek chiropractic care is for back pain (63%), followed distantly by neck pain (30%).

Systematic reviews and meta-analysis evidence supporting chiropractic/spinal manipulation in the treatment of back pain continue to mount. These studies are published in the best scientific journals. Two recent such studies are reviewed here, one pertaining to acute back pain and the other to chronic back pain.

The acute back pain study was published in April 2017 in the Journal of the American Medical Association, and titled (8):

Association of Spinal Manipulative Therapy With
Clinical Benefit and Harm for Acute Low Back Pain:
Systematic Review and Meta-analysis

The objective of this article was to systematically review studies of the effectiveness and harms of spinal manipulative therapy (SMT) for acute (less than 6 weeks duration) low back pain. The authors found 26 eligible randomized clinical trials (RCTs) for review.

The measurement outcomes used in the studies included:

The spinal manipulative therapy was provided by physical therapists in 13 studies, chiropractors in 7 studies, medical doctors in 5 studies, and osteopaths in 3 studies.

The authors note that back pain is among the most common symptoms prompting patients to seek healthcare. The lifetime prevalence estimates of low back pain exceed 50%. Acute low back pain is common and spinal manipulative therapy is a treatment option. The findings of this article included:

“In this systematic review and meta-analysis of 26 randomized clinical trials, spinal manipulative therapy was associated with statistically significant benefits in both pain and function.”

“No RCT [randomized clinical trial] reported any serious adverse event. Minor transient adverse events such as increased pain, muscle stiffness, and headache were reported 50% to 67% of the time.”

This article generated the following editorial by Richard A. Deyo, MD, MPH (9). Dr. Deyo is from the Department of Family Medicine, Oregon Health and Science University, Portland, OR.

The etiology of back pain is often unclear. It is important to acknowledge that for many patients with acute back pain without radiculopathy, a precise pathoanatomical cause of the pain cannot be identified.

“Chiropractic care is popular today with the US public. According to a 2012 report, among patients with back or neck pain, approximately 30% sought care from a chiropractor.”

“In a 2013 survey by Consumer Reports magazine involving 14,000 subscribers with low back pain, chiropractic care had the largest proportion of ‘highly satisfied’ patients.”

“It appears that SMT is a reasonable treatment option for some patients with low back pain. The systematic review by Paige et al suggests a treatment effect similar in magnitude to nonsteroidal anti-inflammatory drugs.”

“If manipulation is at least as effective and as safe as conventional [drug] care, it may be an appropriate choice for some patients with uncomplicated acute low back pain.”

“This is an area in which a well-informed patient’s decisions should count as much as a practitioner’s preference.”

The chronic back pain study was just published [Epub ahead of print, 2018] in The Spine Journal, and titled (10):

Manipulation and Mobilization for Treating Chronic Low Back Pain:
A Systematic Review and Meta-analysis

The primary author of this study is from RAND Corporation. The purpose of this study was to determine the efficacy, effectiveness, and safety of various mobilization and manipulation therapies for treatment of chronic low back pain. This is a systematic literature review and meta-analysis from published studies between 2000-2017. The authors selected randomized controlled trials comparing manipulation or mobilization therapies with sham, no treatment, other active therapies, and multimodal therapeutic approaches. Fifty-one studies were included in this systematic review. Initially, 7,360 published citations were captured and a total of 64 randomized clinical trial (RCT) publications reporting on patients with chronic, non-specific low back pain were included. The total number of participants across the 51 unique studies used was 8,748.

Chronic pain was defined as “ongoing or recurrent pain, lasting beyond the usual course of acute illness or injury or more than 3–6 months, and which adversely affects the individual’s well-being.”

Non-specific low back pain was defined as “pain not attributable to a recognizable, known specific pathology (infection, tumor, osteoporosis, fracture, structural deformity, rheumatoid arthritis, radicular syndrome). Therefore, the etiology of the pain is often unknown and it is not categorized as major pathogenic etiology.”

In treating low back pain, “many physicians rely on non-steroidal anti-inflammatory drugs, opioid, and neurotropic medications, or steroid injections and surgery as their main tools. Because of the potential or apparent risks associated with these tools, non-pharmacological approaches, thought to involve minimal adverse events, have become popular.”

“Given the current interest in non-pharmacological alternatives for the treatment of chronic pain, in particular non-opioid treatments, a systematic review of manipulation and mobilization for chronic low back pain is timely.”

“Mobilization and manipulation therapies are widely used to benefit patients with chronic low back pain.”

“The overall evidence suggests that manipulation and mobilization are effective treatment modalities compared with other therapies.”

“Mobilization interventions, compared with other active comparators including exercise regimens, significantly reduced pain but not disability.”

“There is moderate-quality evidence that manipulation and mobilization are likely to reduce pain and improve function for patients with chronic low back pain; manipulation appears to produce a larger effect than mobilization. Both therapies appear safe.”

The “analyses showed that manipulation significantly reduced pain and disability, compared with other active comparators including exercise and physical therapy.”

“Mobilization and manipulation appear to be safe, based on what was reported in the literature.”

The effectiveness and satisfaction with chiropractic treatment for back pain is quite high. Not only is chiropractic effective, it is also extremely safe. Additionally, chiropractic’s non-drug approach to the management of pain syndromes eliminates the potential adverse effects that are coupled with drug approaches to pain management, especially for chronic pain.

The evidence to support chiropractic for pain and especially for spinal pain management continues to escalate.